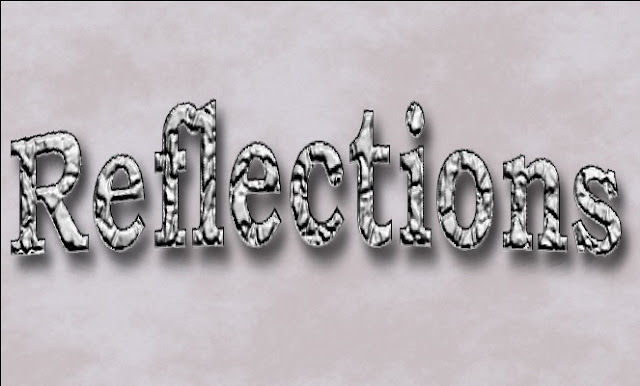 The other night, I had a dream about my grandfather and it made me think about something that might explain why sometimes people are reluctant to call out bad behavior in people they know. To start, there are some things I need to explain about my mom's dad. Bluntly, he was not a nice person. He was a drunk who was verbally and psychologically abusive to my grandmother, his wife, my mom and her siblings, his kids, and to people in general. He was also extremely misogynistic and terribly racist. But those are all things I learned later.

When I knew him best was when I was very young. When I was 5 years old, my family moved away from my grandparents and I didn't see them much after that. And then when I was 7, my grandparents moved to Florida, and I barely saw them at all. So, the man I knew was someone I knew as a very young child. I know things now that make me realize that the man I thought he was then wasn't an accurate reflection of who he was, but the way I feel about him is tied to who I thought he was. If he were still alive and hurting people, he died when I was in my late teens, that might be a problem. But, at this point, he has been dead for more than half my life, so I never felt any great need to reconcile what I know with how I feel about him.

Which brings me to my dream. It was about a time he fixed a toy for me. I couldn't have been more than 3 at the time, and I was very upset. My grandmother had gotten me a Breyer horse. I don't know if you are familiar with them, but they aren't really toys so much as collectibles. They are horses molded from a hard, rather brittle plastic, and they look pretty life-like, and some of them are beautiful, but they aren't good toys for little kids. They break easily, especially their legs, and they're impossible to fix. Glue doesn't stick to the plastic they're made of well, and once they're broken that's pretty much it. I loved them when I was a kid, but my parents wouldn't buy them for me because they were expensive and they broke so easily. But my grandma indulged me sometimes, and she gave me one. And I broke it. And I was really upset.

My grandfather found me crying over the stupid thing, and he acted like a typical grandpa. He offered to fix it. But glue didn't work. So, we went down to his workshop in the basement. It actually was a workshop. He was extremely handy and liked to tinker with things. And he got out this ancient hand drill he had with the teeniest drill bit you've ever seen, and he very carefully bore a hole in the center of the broken end of the leg. It took forever, at least it seemed like forever to 3-year-old me because the drill was hand operated and he had to be careful not to split the leg. Then he drilled a hole in the broken end of the leg piece, and he ran a small piece of wire dipped in glue through both holes and clamped them together to dry. And that's the closest I've ever seen anyone be able to fix a Breyer horse. The pieces didn't stay completely together, but the wire kept them from falling all the way apart again. And that's the man my feelings about my grandfather come from.

He knew a lot about things he had experience with. He was a sailor during WWII, so he knew a lot about boats and the sea and tieing knots and the weather and navigation. And he had natural mechanical talents that would have made him an absolutely brilliant engineer if he had ever been given a chance. Even with only being self-taught, he was able to fix pretty much anything. And he built little machines just for shits and giggles. He liked to make them fight each other, but he also built little gadgets to make common tasks around the home easier. He built my grandmother a dustbin with an extended handle and a foot peddle for scooping because she had a bad back and it hurt her to bend over when she cleaned. Things like that. It's quite possible he could have patented some of them, but he didn't have the education to know that, much less to figure out how to do it. He also fixed up old cars and sold them.

So, like I said, a much more useful person than Trump. But ignorant and bigoted and stubborn in his ignorance and bigotry. And also given to the same kind of hyperbolic statements and black and white view of the world as Trump. Often, when I hear Trump speak, it sounds a lot like my grandfather. Especially when my grandfather was drunk. So, it got me wondering how many other people had/have family who remind them of Trump and if some people have a "soft spot" for him because of that.

Don't misunderstand what I'm saying, Trump is an absolutely useless piece of human shit who has no redeeming value that I can find. But when I hear my grandfather's voice come out of his mouth, I can understand why some people might want to ascribe the good qualities of the people they've known who sound like that to him. Because, as I said, even though I know on an objective level that my grandfather was not a nice person, he was just that, a person. Which means even though if you take everything as a whole he wasn't nice, there were times he acted nice. And since my emotions towards him are tied to the incomplete view I had of him as a young child, it's easy to remember the good stuff and forget the bad. Which makes me wonder how many other people have the same emotional blind spot.

I think being aware of these subconscious connections is important. If someone's behavior is abhorrent, but one is at some point willing or wanting to ignore or excuse it, it's important to be self-aware enough to know why. Because if you aren't, then it's hard not to give in to those feelings. You might want to downplay how terrible what they say is, or automatically dismiss it as something that's said to get a reaction and isn't actually meant. And that kind of tacit acceptance of the unacceptable is how bigotry gets perpetuated.

Now, obviously, this doesn't mean that anyone reading this is going to stand toe-to-toe with Trump and tell him what they think about him. Even if someone did, I doubt it would do any good. From what I can tell, the man has absolutely no sense of shame. But most of us know people who support him and share his vile beliefs. And if we're close to and/or related to those people, like I was to my grandfather, it's not always easy to separate the good from the bad in our heads. But if we want to steer this society back into the realm of decency, then that means we need to start holding people accountable when they behave indecently.

So, even though it will be uncomfortable, I think it's important to call out bigotry when we hear it. That's not to say that we physically attack anyone, but I do think speaking up against hate is something we need more of. Even when the person being hateful is someone we have warm feelings for in another context. Because those are the people we're most likely to be able to reach.

Yes, I realize what we say will often make little or no difference in a person's bigotry; that type of hate tends to be deeply ingrained and entrenched in a person's psyche. But someone listening might be affected by what we say, which certainly won't happen if we allow that type of hate-speech to go unchallenged. And it's always possible that maybe, just maybe, something we say might penetrate the shell of stereotypes and ignorance bigots armor themselves with. Having a prior relationship with the person that might cause them to have the same kind of "soft spot" for us as we'd like to have for them might make it possible for us to get past their defenses. At least a little. And changing one mind at a time is really the only way to change the world.