Just A Peaceful Stroll Through The Forest... ;-) 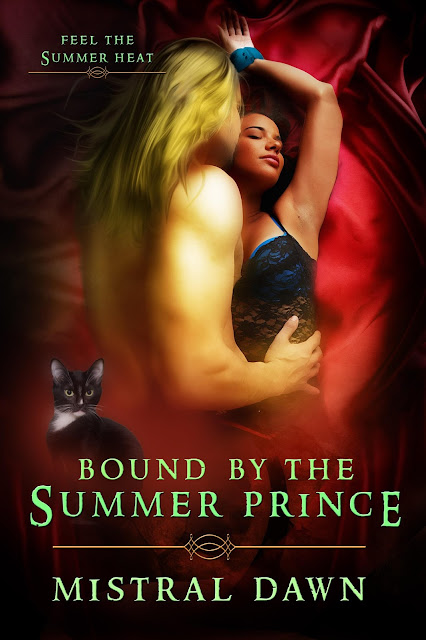 I just thought I'd share a little Fairie fun to brighten up your Friday. Enjoy! :-)

Excerpt from Bound By The Summer Prince:
Looking around for the cat one more time, and failing to find him, Roni quickly started off into the jungle; seeking to put space between herself and her pursuers. She had to be careful about how she placed her feet in order to keep her heels from sinking into the soft, moist ground. More than once her shoes got stuck and she had to stop and free them before she could continue. Because of that she made much slower progress than she'd hoped and she began to worry that it wouldn't take long for the men to catch up to her.

As if to confirm her fears, she heard her pursuers crashing through the underbrush and moving closer to her. She started to panic and looked around for somewhere to hide. Unable to help herself, she turned and looked over her shoulder and saw that one of the men was nearly upon her.

Roni tried to stretch her legs to run faster but one of her shoes caught again and she went sprawling on her face. The man chasing her missed his grab at her when she fell, but turned to take advantage of her helpless position. As she looked up, expecting to feel his hands on her at any moment, she saw a blur of motion approaching him from above.

While Roni looked on, a vine whipped out from the tree above and severed the man's head. She gasped as his head flew off into the underbrush and a second vine dropped down to grab his body and quickly haul it up into the tree's branches. The whole procedure had happened between one breath and the next and left Roni blinking in astonishment.

Scrambling to her feet, Roni desperately tried to avoid looking at the place where the man's head had disappeared. She kept a wary eye on the branches overhead as she scuttled underneath them to continue her flight from the remaining two men. She could still hear them not far away, and she didn't have time to contemplate the fate of the man who had nearly caught her. She'd have to think about that later.

As she ran, she tried to keep an eye on the surrounding forest as well as behind her for signs of pursuit. Her caution cost her speed, and it wasn't long before another one of the men caught up to her. She looked around for something to use as a weapon as he advanced on her. This man seemed to have learned from the examples of his two unfortunate companions and kept part of his attention on their surroundings, which slowed him down somewhat.

Roni picked up a stone she found lying on the ground near a tree, intending to use it to defend herself, and was startled when it suddenly sprouted a plethora of legs and began squirming and chittering at her frantically. With a yelp, she threw it away from herself, and it happened to land on the leg of the man who was chasing her. They both watched in astonishment as the rock-creature quickly climbed to the top of the man's head and latched all of its legs around the man's cranium.

The man started screaming as if the rock-creature were burning him; Roni, unable to help herself, raced over to try to help him. The man was running in circles and waving his arms around hysterically, and he knocked her several feet away from him with his frantic flailing. Before Roni could gather her feet under her again, she saw that the man was bleeding badly.

The bleeding started underneath the rock-creature, from the top of the man's head, but the man quickly began bleeding profusely from his eyes, ears, and nose. Horror-struck, Roni continued to watch as the man’s insides appeared to melt. First, his head seemed to deflate and sink into itself, as if his skull had ceased to exist, then his neck sunk into his chest and his chest seemed to run down towards his feet. Mercifully, the man's gurgling screams ended quickly, and it was only Roni who was left to be horrified as his bones seemed to liquefy and what had once been a human being turned into a skin sack leaking red, viscous fluid.

Once the man was a puddle of skin and goo on the ground, the rock-creature settled in the middle of it and extended what looked like a straw to Roni. It inserted the end of the straw into the puddle and began making slurping sounds. Fighting her rising gorge, Roni ran off into the forest.

Want to find out what happens next? Go ahead and click on the link below to grab your copy. Happy reading! :-)