A #Royal #Wedding In The Heart Of #Summer! 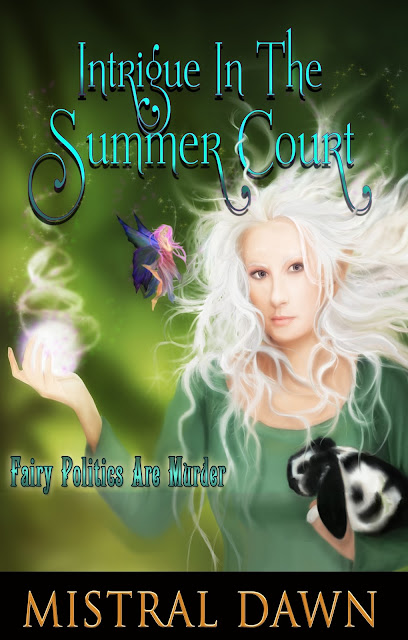 I know it's the middle of winter and you're all probably as sick of the cold, yucky weather as I am, so I thought I'd give you all a little taste of summer. Enjoy! :-)

Excerpt from Intrigue In The Summer Court:
Just then, the queen stepped up onto the dais at the center of the room. For the first time in Jillian's memory, the royal Elf appeared at a Court function without the Summer crown adorning her beautiful, red hair. She bowed to the assembled Fae and then, in a gesture ripe with symbolism, she moved behind the two thrones that had been placed on the stage and stepped off the platform to blend with the crowd.

As the queen stepped down, Roni and Uaine both stepped onto the dais and sat side by side in the thrones. The chairs themselves were deceptively simple, seeming to have been made of plain wood. It was only when the two royals sat in them that the genius of their construction became apparent. In spite of the vast differences in physical proportion between the prince and princess, the thrones somehow made them appear to be of equal size. Once again, the symbolic meaning was clear: the two would rule as equals, with neither more important than the other.

The clothing they wore was also full of meaningful imagery. The gown the princess wore mirrored the shifting red/gold/orange tones of the stone from which the throne room had been constructed. The colors turning her skin a golden brown and her hair into a glowing fiery halo. Jillian had never seen a better representation of the sun personified.

The prince's suit was made of cloth that was a collage of varying shades of green. Somehow the mottled fabric created a strong suggestion of lush, verdant, foliage. It was clear he was meant to embody the life, growth, and verdure that were the heart of the Summer Court. Coupled with the brilliant heat and light of the daytime encapsulated by his Anamchara's outfit, they had captured the essence of what it meant to belong to the Court of Summer. And yet neither was complete by themselves. It was obvious Roni wanted to send a message to the Summer Fae, and would use every means at her disposal, even her clothing, to do so.

The Fae did not have any priests or shamans. Each individual was allowed and expected to find their own path to the goddess. Since there was no one to officiate, the prince and princess made their vows to each other through the simple method of declaring their intentions in front of witnesses. The sound of the two royals exchanging promises to love, honor, and respect each other rang out in clear tones over the assembly. The ceremony had been timed perfectly, and just as the sound of their oaths to each other faded away, the sun reached its zenith in the sky.

The palace had been constructed where it was because doing so put the structure in the correct location to allow the sun to be directly overhead when it reached its peak on the Summer Solstice. The throne room was positioned in the center and at the top of the castle. So, at the exact moment the Summer Court reached the zenith of its power, the sun struck the top of the room and made the ceiling translucent. As the sun crested in the sky, the light of its rays flooded the throne room. Bathing the assembled Fae in its golden glow.

Just as the illumination was at its brightest, Roni and Uaine picked up the crowns that had been placed before them on the stage. Each placed the crown they held on the other's head. Turning to face the Fae who looked up at them, they both vowed to hold their duties sacred, to honor the goddess, and to make the welfare of their people their greatest concern. As the last syllable died away, a deep, gong-like tone, more felt than heard, rang through the room. At the same time, the light in the room shattered, as if by a giant prism, into a million rainbows.

Jillian watched in astonishment as glittering circlets of woven light descended through the air to alight on the heads of the new king and queen and become superimposed over the physical coronets. A hush moved through the crowd, as the Fae witnessed something that had never before happened in living memory. The goddess had spoken. Her will was clear and indisputable. Roni and Uaine were the chosen monarchs of the Summer Court and had been anointed as such by Dea Matrona herself.

As the shock of beholding the goddess crown the new Summer monarchs faded, a roar of approbation filled the room. Many of the Fae fell to their knees, giving thanks to Dea Matrona for her bounty and blessing. It was unlikely that any would continue to oppose the rule of the new king and queen, not when they had received a literal ringing endorsement from the goddess.

After the initial jubilant outcry, the noise began to fade as each Fae reflected on the importance of what they had been privileged to behold. The congregation began to file out of the room in silence, each individual lost in their own thoughts. Jillian herself contemplated the meaning and importance the Summer Solstice held.

Want to find out what happens next? Well, if you haven't done so already, go ahead and grab your copy, today! If you're a Kindle Unlimited member, you can even read it for free! :-)