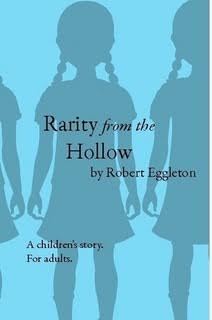 Robert Eggleton is joining us here today to talk about his book, Rarity From The Hollow.  Robert, can you tell us about yourself and how many books you have written? :-)

Robert:  Hi, Mistral Dawn. Thanks for the opportunity to tell your readers a little about myself and my debut novel.  Rarity from the Hollow is my debut novel, the first in a prospective series, Lacy Dawn Adventures. I’m a recently retired children’s mental health psychotherapist. After decades of dreaming of becoming an author, I was inspired to act on my dream in 2006 by a little girl that I met during a group therapy session that I was facilitating.

The program that I worked in was an intensive day program. Kids would be admitted for treatment because they were not benefiting from their educational opportunities at school – their mental health concerns interfered with learning, perhaps contributing to behavioral problems. The kids would come to the program during school hours, instead of going to school, for six or so weeks of mental health treatment, and then return to school with new skills. Many of the children had been victimized, such as having experienced physical or sexual abuse.
I have over forty years in the field of child advocacy, and have a background in writing nonfiction as part of my jobs, published by private and state agencies, such as research or statistical reports, etc. One day in 2006, around the table that was used for written therapeutic exercises during group therapy sessions, an eleven year old began to speak, not just to disclose her severe traumas, but about her hopes and dreams for the future – finding a loving family where she would be safe. My protagonist was born that day. My wife named her Lacy Dawn.
Three short adventures have been published by magazines and preceded publication of Rarity from the Hollow. Six months ago, I retired from my and began self-promotion of the novel. The sequel, Ivy, is almost ready to submit to the publisher for editing.

Me:  Wow!!  Sounds like this is a real passion for you!  And about a really important issue in our society too.  What are you working on now?

Robert:  Ivy is the next full-length Lacy Dawn Adventure. I thought that it was ready for submission to the publisher, but I have learned so much as a result of self-promoting Rarity from the Hollow that I want to rework it. My writing doesn’t seem to fit well into mainstream expectations. It is cross-genre speculative fiction for adults. This has proven to be a barrier to promotions, so I want to step back and to take a second look at the Ivy manuscript before I submit it. It could be a little too outrageous. Ivy asks the question, “how far will a child go to save a parent from drug addition?” It includes on and off-world adventures, social commentary, comedy and satire.

Me:  Sounds like an interesting, but heavy, read.  Best of luck with figuring out how to make it marketable. :-)  What authors, or books, have influenced you?

Robert:  I’m not sure that you have enough bandwidth for me to make a complete list of writing inspirations, so here’s a few. Of course, Heinlein’s determination as an aspiring author after having been rejected so many times inspires my own persistence. The same could be said about Andy Weir’s promotion of The Martian.
Ferlinghetti, the poet of the Beat Generation, showed me how to enjoy my anger about political and societal issues. Similarly, Vonnegut’s anger in Breakfast of Champions helped me stay strong as a children’s advocate and as a writer, and how to continue to have fun experimenting with my writing style outside of commonly accepted structures and formats.
The Lord of the Rings trilogy and the Harry Potter series reinforced my faith in the potential of adolescent morality and the future of the world. Watership Down by R. Adams was such a sweet adventure that some of this element just is a necessary ingredient of even the scariest or saddest story.
The versatility in cross-genre and the use of humour by Bradbury, Dean Koontz has been masterful and can give me enjoyable nightmares, Nora Roberts knows how to get me in a romantic mood, but Hitchhikers Guide to the Galaxy by D. Adams and Another Roadside Attraction by Robbins pushed me into the wilder side of writing.

Me:  You've mentioned some of my favorite works there. I think there's something elemental that appeals to an almost universal audience in most of those. :-)  What are you reading now?

Robert:  My wife and I are both reading a debut novel, Twin Reflections, by Elizabeth Joseph. She’s fourteen years old. I’m not necessarily recommending her novel to your readers, we’ll see, but I do recommend that everybody in the world support the creative efforts of youthful contributors.

Me:  Agreed!! For those who might consider reading your book, what would you tell them to expect?

Robert:  The first thing that I would recommend to prospective readers of Rarity from the Hollow of any age is not to read it if you are prudish, faint hearted, or easily offended. This novel has been recommended for adults by some reviewers, but, frankly, I, personally, believe that teens are routinely exposed to much more “mature” content than is in the novel, such as by video games, movies, and mainstream YA literature.
When it was recently awarded a Gold Medal by Awesome Indies, the reviewer closed, “…Rarity from the Hollow is a funny book that most sci-fi fans will thoroughly enjoy….” There was no mention of age appropriateness.
Last, I would advise prospective readers that the story is harsh in early chapters but becomes satiric and comical. My advice is especially to those of us who have experienced some type of abuse or violence in our own lives. Four bloggers who review book disclosed to me that they had been childhood victims of maltreatment. Three of them wrote glowing book reviews of the novel, one of whom publicly disclosed that she had been a rape victim as part of her review, and the fourth reviewer promoted the novel on her blog and on a radio show broadcast in the U.K.

Me:  Congratulations on the award!! It sounds like it's well deserved. :-)  What's your favorite part of being an author?

Robert:  After making contributions into the U.S. Social Security fund, I recently retired from my day job. However, after I retired I soon discovered that it’s hard to make ends meet on a fixed income. I’m looking for a part-time or full-time job and expect to reenter the workforce.

Me:  Congratulations on your retirement and best of luck with finding your next calling. :-)  What are the hardest and easiest parts about being a writer?

Robert:  Writing is easy. All other aspects of being an author are difficult, especially self-promotion. It is not a good fit to my personality to talk about one’s work, or oneself. As I just mentioned, it is also tough to invest so much of your time on an activity that provides little likely return on investment. In my case, author proceeds have been donated to a child abuse prevention program, and that makes my hard work easier.

Me:  I think most authors would agree with you about self-promotion. ;-)  Your generosity with regards to the proceeds from your work is admirable! :-)  What genre do you place your book in?

Robert:  I write adult literary science fiction cross genre. I know. That’s a real mouthful. I use the term, “adult,” to ensure that people know that I’m not trying to corrupt their children with wild ideas. “Literary” means that my writing includes content that prompts reflection after the last page has been turned, and the plot does not depend on action scenes as much as on character development, and that it includes social commentary. The science fiction is a backdrop. My writing includes an element of fantasy, magical realism, everyday horror, romance, and anything else that has a label and that fits the needs of the story. Some people use the term, “genre bending.”

Me:  Personally, I'm a fan of "genre bending," it usually makes for interesting reading. ;-)  And so all these fine folks can find your hard-to-define work, are there any links you'd like me to post?  :-)

Me:  Excellent!  Thank you for joining me today, Robert.  Everyone else, thank you as well for dropping by and don't forget to check back tomorrow for more of Mistral Dawn's Musings!! :-)