I made up a instruction sheet for basic tweeting and someone asked me to put it in a blog post, so here it is! ;-)

Twitter Instructions:
Okay, this is just my take on Twitter, but I thought some of you might find some of these things useful. I've heard a lot of people say they don't know how to use twitter, so I thought I'd tell you my process for composing a tweet. Again, other people may do things differently, and their way may be better. :-)

First, twitter only allows you 140 characters total for each tweet, so every character has to count. Links take up 23 characters (no matter how long they are) and pictures take up 24 characters, so you have to keep that in mind.

Links: I, personally, think it's essential to include these in any tweet where you want people to go to another website and do something (buy a book, like a page, support a thunderclap, etc). I just don't think people are likely to do anything unless the link is right there ready to click on.

But aesthetically, I think it looks better to use a site like https://bitly.com/shorten/ to shorten your link to something like this: http://amzn.to/1vS2bWs .

I use pictures in almost all of my tweets. For one thing it makes them standout; I can use teasers with excerpts from my books or reviews of my books in them. And for another thing, it puts them in my "Pictures and Videos" which makes it easy for people who want to retweet me to find my tweets.

This is important, because if you want your tweets retweeted, you have to retweet other people's tweets. That means your twitter page is going to have lots of tweets on it that aren't for your stuff. If people want to retweet you they have to scroll through all of those other tweets to find your tweets...unless you make it easy for them. I also click the little star at the bottom to favorite my tweets, which is another place people might look for my tweets to retweet. Which brings us to...

Pinned tweets: Pinned tweets are tweets that stay at the top of your twitter page. Again, this makes them easy to find and retweet. Also, it marks them out as important to the person who pinned them. If you pin a tweet, it's usually something that you want spread around. It might just be a sales tweet about your books, but it might also be about a sale, event, new release, etc. You can change pinned tweets as often as you like, but you can only have one pinned at a time. I usually change mine once a day.

Unfortunately, you can only see pinned tweets when you log into twitter on a computer. On mobile apps (at least the one's I've used) the tweets are still there but they aren't pinned, so you have to search for them. Plus, there's nothing to mark them as pinned, so you don't know that they are especially important to the person who pinned them. 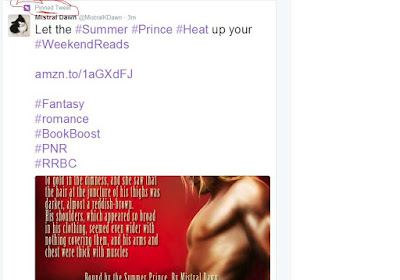 How do you pin a tweet? At the bottom of the tweet are three dots (again this is on a computer, you can't do this from a mobile app): 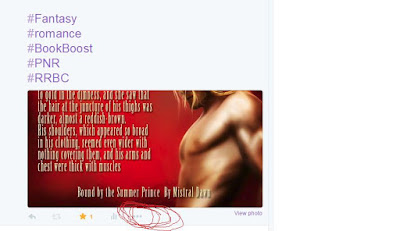 You click on the three dots and a drop-down menu appears:

This picture says "Unpin" because my tweet is already pinned, but for a tweet that's not already pinned it will say "pin to your profile page." You just click on that and it's pinned. :-)

Hashtags: Everyone has heard of hashtags, but not everyone knows what they are. What they are is a way to mark key words. For instance my tweet:

Let the #Summer #Prince #Heat up your #WeekendReads

Notice how the words I want highlighted are marked with hashtags. How do you know which ones to use? Well, it's kind of half guessing, and half logic. You want to use words that people are looking for. It's summertime in the northern hemisphere where many of my readers are, so I have the word "summer" marked with a hashtag. It's part of the title of my book, so it's relevant (never use irrelevant hashtags, that just wastes characters and annoys people), and people who are tweeting about various things to do with summer might look at that hashtag. Even people in the southern hemisphere might look at things with that word, because they're sick of winter and looking forward to summer. So, there's at least a reasonable chance someone might see a tweet with that word hashtagged. Someone looking for a recommendation for a book to read over the weekend might search out #WeekendReads, so I've included that as well. Etc.

Some hashtags are specifically used to request a tweet be retweeted by a group. #BookBoost is an example of that. The twitter ID @freeboostpromo was set up to retweet book related tweets. As always, the best way to get them to retweet your tweets is to follow them and retweet their tweets. Two other hashtags I've found that are usually good about retweeting are #SNRTG (social network retweet group) and #TW4RW (tweets for romance writers), but there are a lot of other ones as well. #IndieBooksBeSeen is a indie authors group that may help with your promotions, but again you have to give if you want to get.

Some hashtags are used to mark genre. In this tweet I've used #fantasy, #romance, and #PNR (paranormal romance) for that, but sometimes I use others. This is to hopefully get your tweet in front of people interested in a specific topic, like fantasy or romance.

The #RRBC hashtag is for a bookclub I belong to (Rave Reviews Book Club), and I use it to mark me as a member and encourage other members to retweet my tweet. It should only be used by members of the Rave Reviews Book Club, and there are other hashtags like that for other clubs and groups. So it's best to know what your hashtags stand for before using them. Using a hashtag for a group you don't belong to is considered rude, and can upset the people who do belong to that group.

So, back to choosing which hashtags to use. Generally, I try to pick hashtags that a lot of people are using/looking at that day. How can I tell? Well first, there's a list of trending hashtags at the side of your twitter feed (notice I said "feed" and not "page." Also, this is only true on a computer), and that's a good place to start. Your twitter feed looks like this: 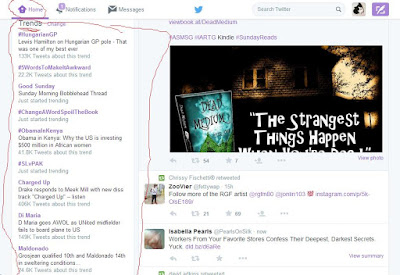 As you can see, the Trends list is there on the side. You get to this page by clicking on Home at the top. 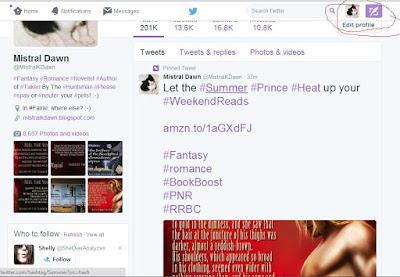 It's where your pinned tweet is and you get there by clicking on your avatar at the top and then on "view profile." You get to other people's twitter pages (to find their pinned tweets and pictures to retweet) by clicking on their twitter handle in one of their tweets, or by searching for their twitter handle and clicking on their page from there. The list of trending tweets will also show up on your twitter page, but you can't tweet from that page as easily (you can, it's just an extra step), so back to your twitter feed. If none of the hashtags that are trending seem relevant, then you can look for ones that do. You can put a hashtag in front of any word you want to mark, there aren't any restrictions on this other than that it should be relevant to keep from annoying people, but you usually want to pick words that people are looking at/using (unless you're trying to create a new hashtag in the hope it will become popular like #author4author). So how do you figure this out? One way is to type in a word with a hashtag in front of it, and see if Twitter has any suggestions for you. Like this: 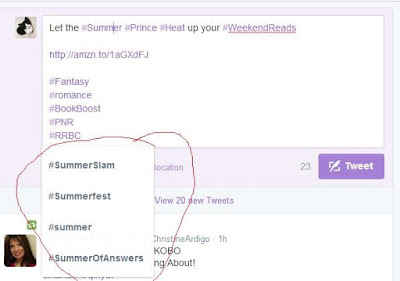 You see when the cursor is on "summer" Twitter creates a drop down box with suggestions. These are usually hashtags that are being used/searched. As you type your word in, see if Twitter gives you any suggestions. In this case, "summer" is on the list, so I've used it. You can check each of your hashtags this way, to try to gauge the chance of it helping get your tweet seen.

How do you attach pictures? Well, the easiest way is just to click on the "add photo" button and select the picture you want to attach from your picture files. 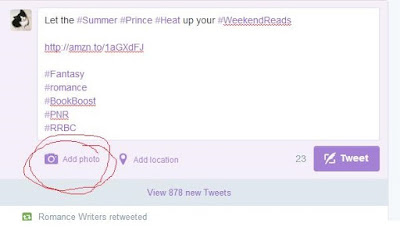 But sometimes you want to be able to cut and paste a whole tweet, including the picture. For that you need the picture twitter link. The easiest way I've found to get that is this:

2. Find tweet after it's been tweeted and click on the three dots on the bottom and then on the 'delete tweet' button on the drop-down menu: 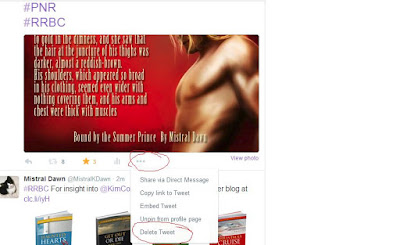 3. When you do that, a new box will appear with the whole tweet, including the picture link. You can select (by dragging your cursor along it) and copy (by right clicking) the picture link from here. **Be careful to make sure you hit the 'cancel' button and not the 'delete' button when you're done copying your picture link: 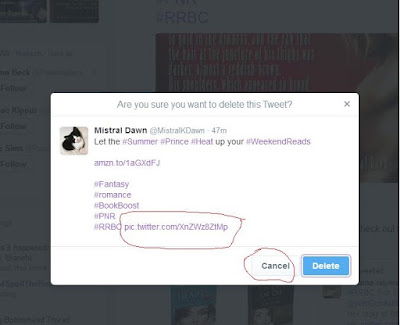 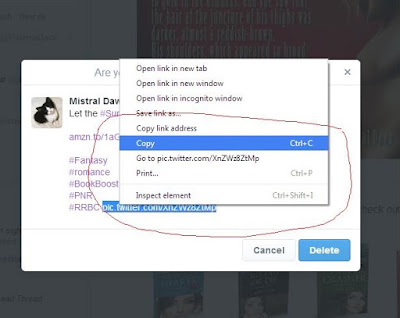 Let the #Summer #Prince #Heat up your #WeekendReads

Anyway, this is how I make my tweets. One thing I can't stress enough is that if you want your tweets to be retweeted, retweet other peoples' tweets. If someone retweets you, don't just send a tweet saying thank you, retweet something of theirs. And try to make sure what you retweet is actually something of theirs and not something they've retweeted for someone else. If they haven't made it easy for you with a pinned tweet or pictures, try looking at their profile and see if you can figure out what's important to them (are they selling something? Do they have a blog? etc.). Also, look for tweets that have been created by their twitter ID, and not tweets that say "retweeted" in them. Thanks are nice, but retweets are better. ;-) Hope this helps! :-)