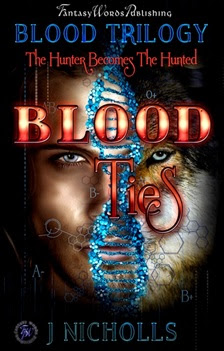 Julie Nicholls is here today to talk about her awesome new book, Blood Ties.  Julie, take it away! :-)

Julie:
Thank you Mistral Dawn for allowing me to take over her blog for this post♥

Blood Ties is an urban fantasy paranormal romance and is the first in the Blood Trilogy by Julie Nicholls.

I’d like to introduce you to K 3 4 G E N and G H 0 5 C T. Two genetically enhanced humans who have spent the last few years of their lives hunting escapees from Solgen Laboratories. A company owned and run by Dr. Keller, a geneticist.

“There’s no termination gene, is there?” He glanced over his shoulders and silently counted his opposition. Three guards pointed their Berretta’s at his head. He had to be Houdini to get out of this one. Crossing his arms in front of his body while he waited for Dr. Keller to make his move, or give his order, he prayed Gabriel wasn’t sleeping on the job.
“I guess you will never know.” Keller smirked, and then looked past Keagen and beamed a wider grin. “I’d like you to meet someone.” Motioning with his hand, he beckoned the figure entering the room to come forward.
Every hair on the back of Keagen’s neck prickled. He knew this had to be his replacement. Despite his ever-cool demeanor, his heart raced to the point of bursting. For once, he had no words, no comeback. If nothing else, it would be an interesting fight, but he didn’t expect to live through it. Outnumbered and seemingly outmatched, his option was to wait and see what developed. Catching sight of a woman in his peripheral vision, Keagen slowly turned to see wild and excited eyes staring. He couldn’t help but look twice. The woman was young and petite. Platinum blonde hair, cut into a bob instantly caught his attention, together with dark, almost black, eyes. Dressed in a black, figure-hugging body suit, with an uncountable number of knives and pistols strapped to her body, she was a walking armory.
“Hi.” She greeted Keagen with a smile.
It was hard not to notice her beautiful features. Keagen always appreciated a good-looking woman, and this one was no exception, although he would die before he told her so. Silently weighing up his options, planning an escape route and wondering what the fuck Gabriel was doing, he stalled.
“Hey, yourself.” He flashed a wicked smile. “I expect you’ve been looking forward to this moment, right?” Keagen slowly folded his arms across his chest with the intention of holding both Glocks hidden beneath his jacket.
The woman smiled and nodded. Equally sly and calculating, she moved both hands to her hips to rest on the holstered side-arms.
Dr. Keller interrupted the pissing contest. “I would very much like to stay and watch what I expect is going to be a spectacular event, but alas, I have to leave.” He motioned to the armed guards behind Keagen and two of them left, leaving just one remaining. “I’ll leave a man for assistance.” He turned to the female, who shook her head.

Blood Ties is available at Amazon in eBook, paperback and is coming to Audio Book within the next few weeks.
Please drop by my official website JulieNicholls.com and check out my other books

And check out one of my favorite posts
Posted by Mistral Dawn at 4:00 AM